skip to main | skip to sidebar

The 2009 WMAC / Dion snowshoe racing series kicked off in Woodford, VT yesterday. This was my very first snowshoe race way back in 2003 when I car pooled with a full cast of veterans: Dave Dunham, Dan Verrington, and Richard Bolt. I was a rookie and followed them around and tried to get my bearing around what was a new sport for me that winter. I learned so much in one hour. The biggest take away from my first snowshoe race was to pay attention to course markings and don't assume the athlete in front of you knows where they are going. I recall over 20 snowshoer's took a wrong turn or did not follow the course. Either way, Dave Dunham knew the course and won the race by almost five minutes. The rest of us added a good 15 minutes to our races as we all followed eachother back onto the course. What a panic that was. Welcome to snowshoe racing! Meanwhile, our lost group who would have finished in the top ten, began finishing at the 47th spot led by Richard Bolt. Check out the results in the WMAC archives via the newsletters (snownews 2.3).

Yesterday brought on a new face to the sport of snowshoe: CMS teamate Jim Johnson (DoubleJ). He's been on the shoes before but this was his first race. I joked about my experience in the car ride to Woodford, VT as we left the CMS Park and Ride lot in Andover at 6:30. Dave Dunham was behind the wheel with me riding shotgun while Jim and his significant other, Kristin hung out in the back seat. We rolled into the ice laded parking lot in Woodford, VT just before 9am. Bob Dion was set up to provide his usual offering of "loaner" shoes. DoubleJ was ready to write a check when several WMAC vets moved in to get their snowshoes repaired from the abuse earlier this winter or last season. Meanwhile, Dave Dunham had a plan to mark off the course that would begin only 90 minutes later. This is not even Dave's race and he is volunteering his effort, time and over 100 flags to mark the course. How about that for unselfishness? Meanwhile, I took it upon myself to ensure that DoubleJ got situated with the shoes he needed so he could have ample time to warm up and get ready for his race.

Fellow CMS teamate, Tim Mahoney rolled in with Abby Woods and a friend. Not too far behind, Tim Van Orden showing off a full beard, arrived in his cool trademark green Oregon, full zip, warm up jacket. He's been under the weather so he was taking photos. I can't wait to see what he and Kristen got for photos. At the tail end of a 2 mile warm up with DoubleJ with a few more tips for him, I saw last years winner, Josh Ferenc and gave him a high five. He was certainly a favorite for the day and he did not disapoint.

The race went off after some words from who I thought could have been the race director. He rightfully gave Dave Dunham credit for just marking the course. Meanwhile, it sounded like the director was out earlier in the morning cutting a few fallen trees on the course. I quickly settled into fifth place heading into the singletrack that awaited the race about 800 meters in. Josh was upfront and DoubleJ smartly settled right in behind him. He did have plans to hang with Dave who was two spots behind me at this point. The footing was pretty good and made for decent passing off the single track if you had to. A guy in front of me stepped aside after a mile to let me pass. Dave Dunham and Tim Mahoney went by me minutes later. I hung behind Tim the rest of the way along the rolling course with some tricky footing along some bare ground in spots where water did not freeze. I took one digger at one point in the snow and felt like a sprained an ankle within a mile of the finish but I survived. 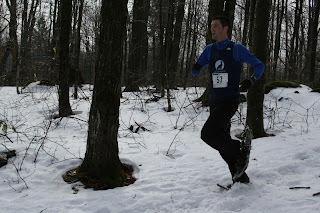 The results are not out yet but I had 25:31 on my watch, about 10 seconds behind Tim and 20 behind Dave. DoubleJ held on for 2nd place while Matt Cartier was right behind him. The gent who stepped aside for me earlier in the race finished within 30 seconds behind me to finish 7th. Fresh loaves of Vermont Bread Company bread awaited at the finish line chute for the finshers. Tim Mahoney, Dave, DoubleJ, and I imediately went over the course to pick up the flags along the course and joked about exciting races. 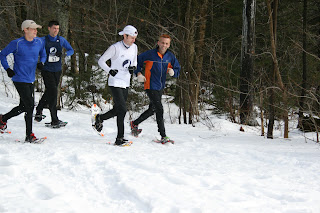 Tim Mahoney, me, Jim Johnson, and Dave Dunham heading to pick up the course flagging.
Photo by Kristin Wainwright.

It was a fun road trip with plenty of laughs. A big thanks to Dave for driving and DoubleJ and Kristin for the good company. Jim is going to have a solid winter ahead of him as he plans on mixing in some indoor track races. My plan is to take it one week at a time. I will certainly run more snowshoe races than anything else this winter. I can't make all of the races due to scheduling conflicts but will do my best to support the races. I will be at the last BU development meet this Saturday to cirlc 15 laps for a 3K around 9:30.
Posted by Jim at Monday, December 29, 2008

Jim
Boston, United States
It's not about the miles, it's how you live them.